I had the pleasure of visiting Curaçao in March 2006 for 9 days. Curaçao (pronounced [kura'são]) is an island in the southern part of the Caribbean Sea off the coast of Venezuela. The isle is the largest and most populous of the three so-called ABC islands (for Aruba, Bonaire, and Curaçao) and belongs to the Netherlands Antilles. The flora of Curaçao is unlike the typical tropical island vegetation and is more like that of the Southwestern United States. Various forms of cactus, thorny shrubs, and evergreens are prevalent. The island is about 30 miles long and 7 miles wide at the widest.

I was invited by a ham radio friend to join a bunch of other hams for a radio contest (WB9Z invite for ARRL DX SSB) from the large multi-op station PJ2T. I stayed in a two bedroom house with the house owner and his wife (Geoff/W0CG and Cindy, who live in Ohio most of the year). 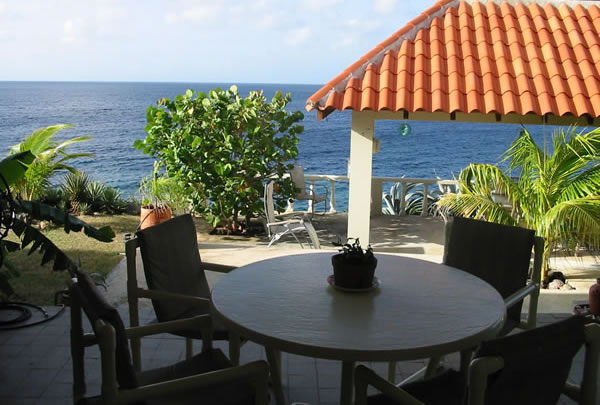 This is the view out of the bedroom I stayed in. The house is directly on the ocean, with a 30' high dropoff to the ocean. 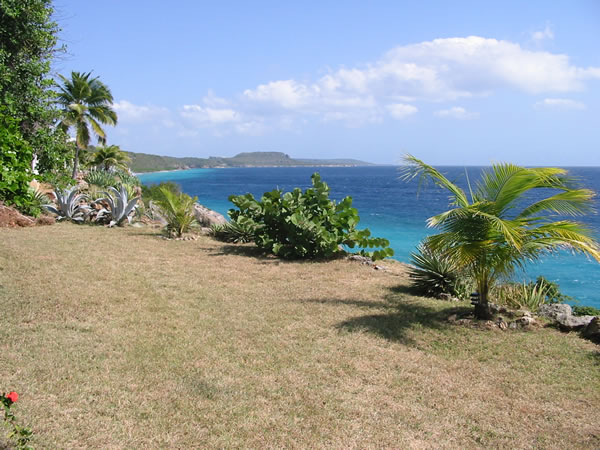 This is the house's backyard. Not a bad view, huh? 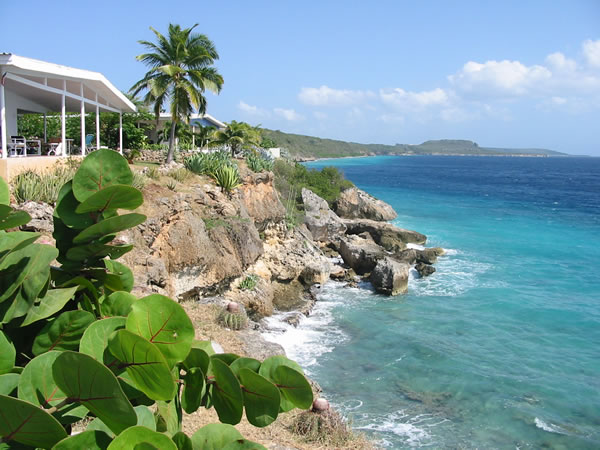 Also taken from the house's backyard. 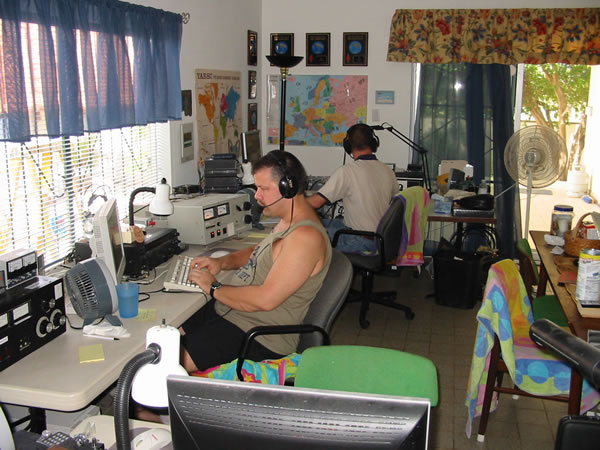 The main room of the house is a big radio room with lots of ham radios, amplifiers, computers and other gadgets. Here's me on the left having a little radio fun. 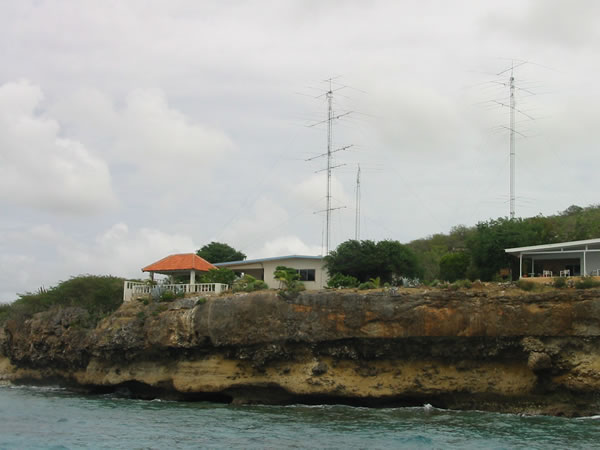 This is the view from the ocean of the house I stayed in, the dropoff, and the ham radio towers. This was taken from the scuba dive boat I was on. One of the popular dive spots is right here in front of his house. 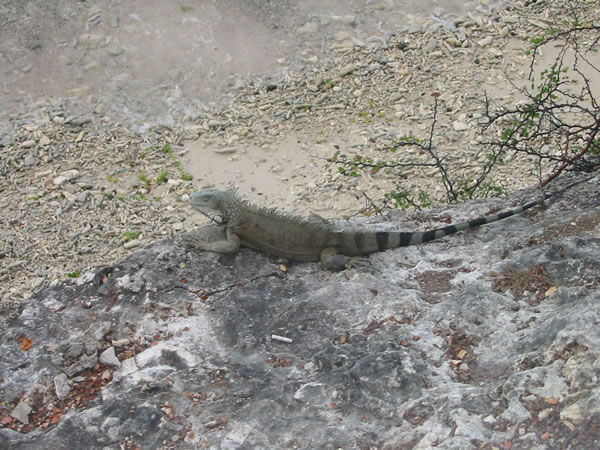 Tons of iguanas running around. Boy, are they fast! 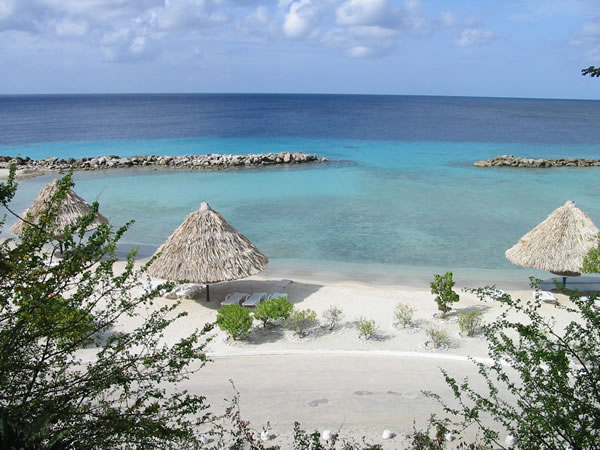 I had to stay one night at the local resort, the Sunset Waters Beach Resort. It was a very nice all-inclusive resort with the island's best dive operation, Sunset Divers. 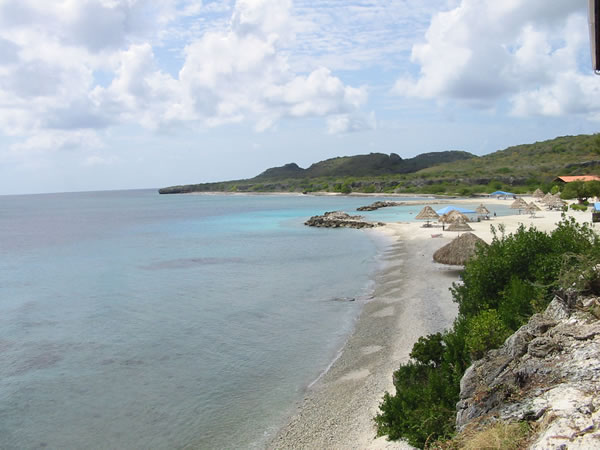 The view from my hotel balcony at Sunset Waters Beach Resort. 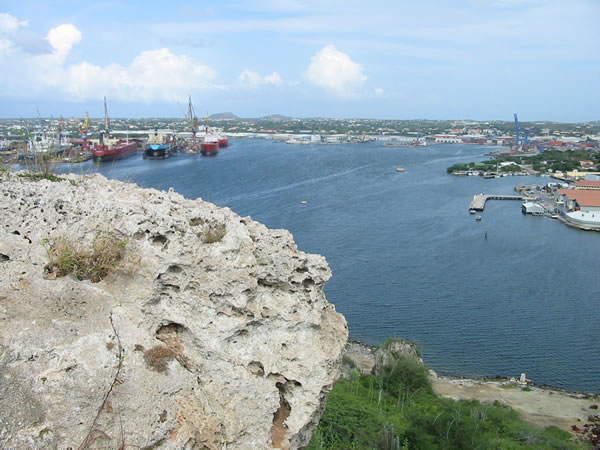 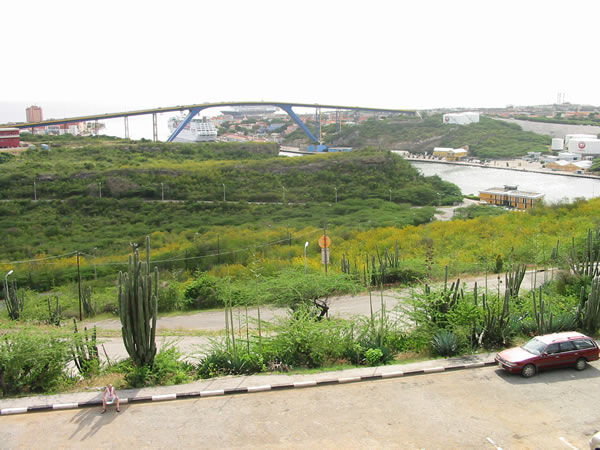 This is the canal that leads into the shipping port. The bridge (Queen Juliana bridge, the tallest in the Caribbean) is tall enough for the large cargo and passenger ships to pass underneath it. Beyond the bridge is two passenger ships docked. The city of Willemstad is split in two due to the bay. The two halves are connected by a floating pontoon bridge (Queen Emma bridge) for the people to walk across. It is the world's largest floating pedestrian bridge, built in 1888, 700 feet long, closed to cars and swings open when ships must enter the harbor. 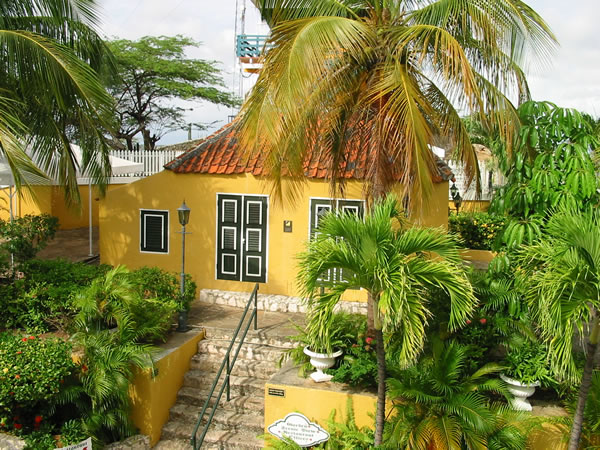 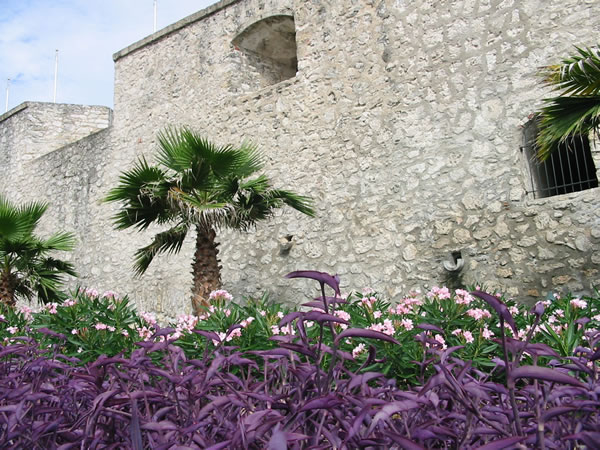 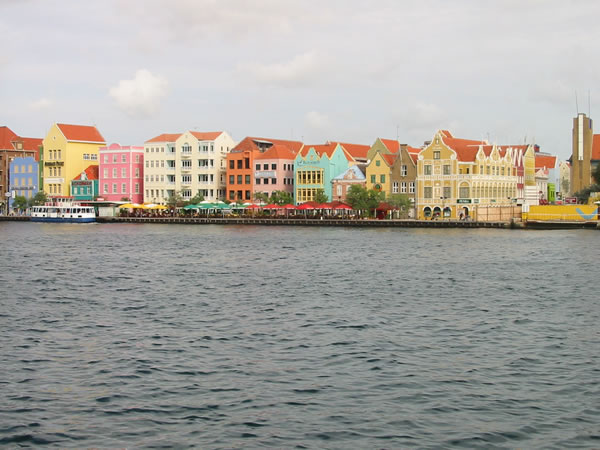 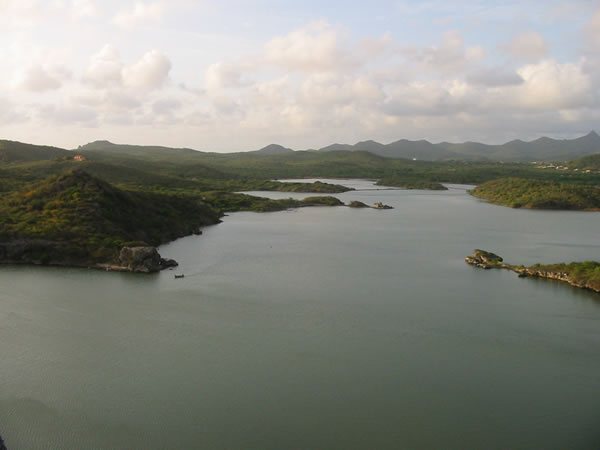 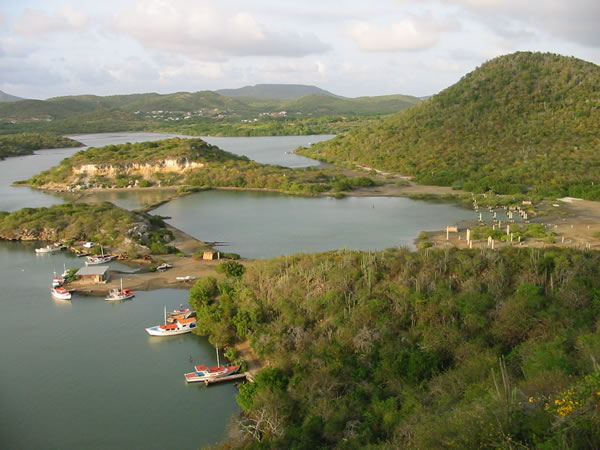 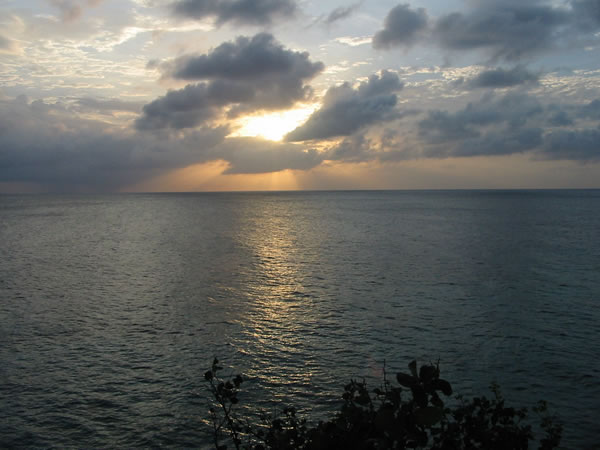 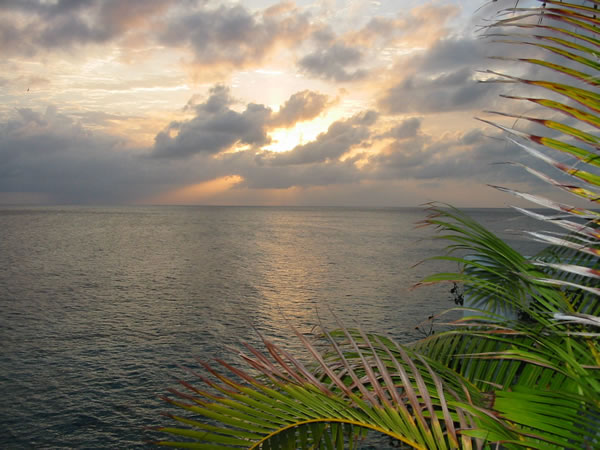 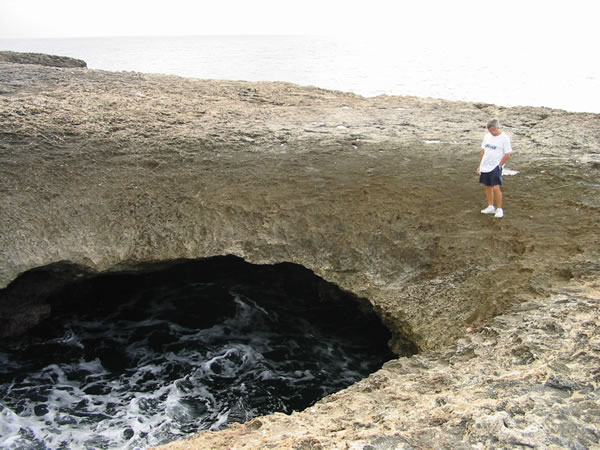 A blowhole in the Christoffel National Park near Westpunt and my house host, Geoff PJ2T/W0CG. 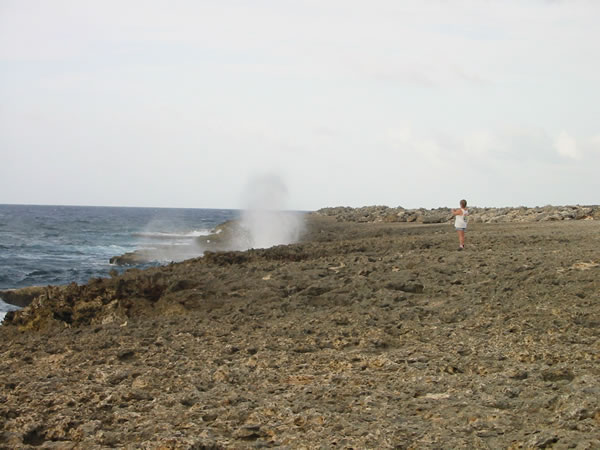 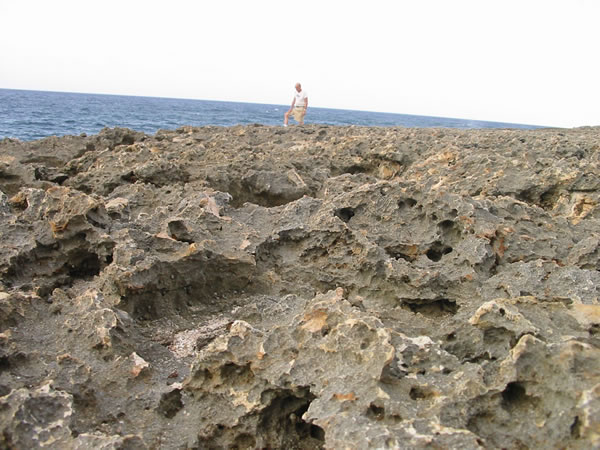 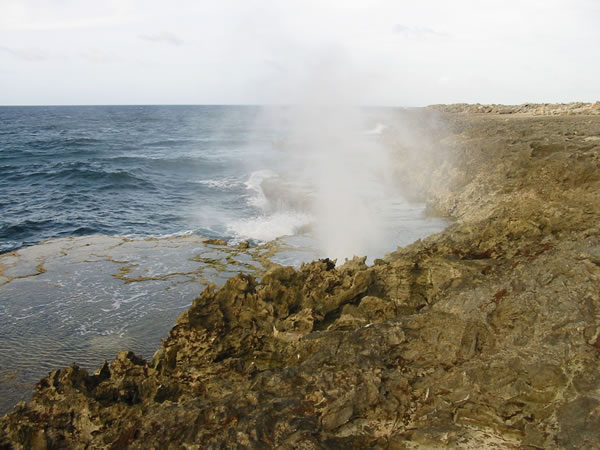 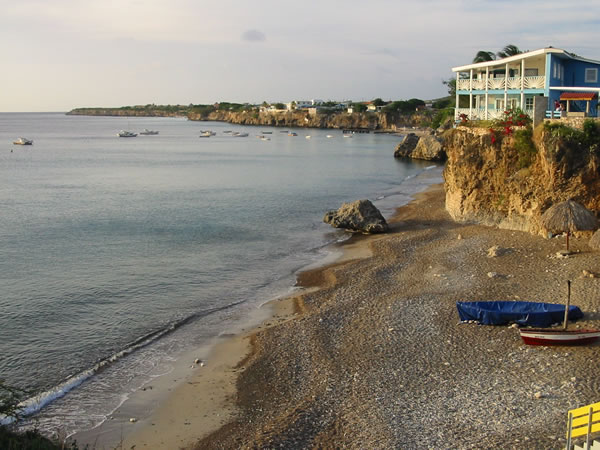 A beautiful scene at Playa (beach) Forti, towards the Western tip of the island. 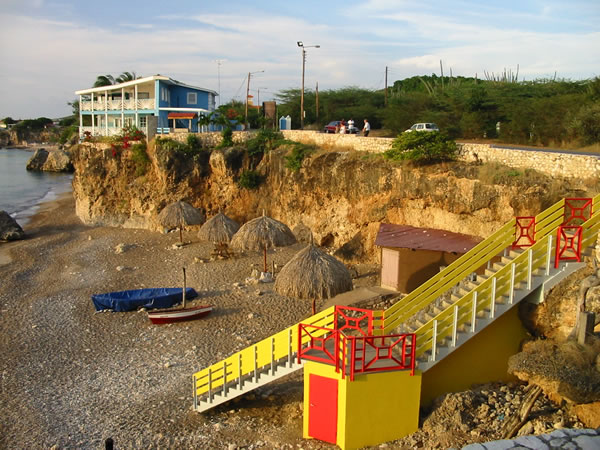 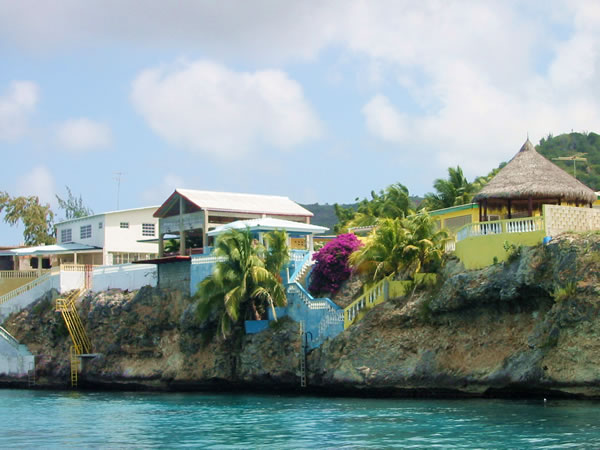 Some of the nice houses at Playa Lagun. Notice the staircases down the stone cliff. 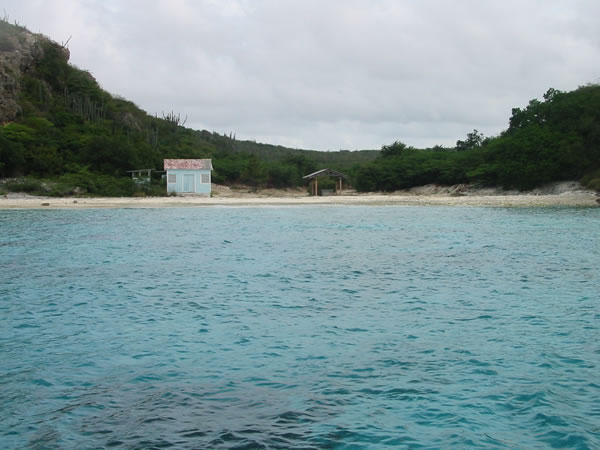 Now this is a secluded beach!